For decades, dolphins in the Eastern Tropical Pacific Ocean were intentionally

schools. More than seven million dolphins were killed by the purse-seine tuna fleets,

the largest killing of marine mammals in history. In 1988, we provided the world with the first video footage of dolphins dying

in tuna nets. In 1990, we established the Dolphin Safe tuna program,

setting the worldwide standards to stop the chasing, killing and setting of nets

on dolphins. More than 95 percent of the world’s tuna companies are now

on canned tuna in markets throughout the world. We maintain the International

in 76 countries around the world, to ensure that tuna is caught without chasing

or netting of dolphins. Dolphin deaths in tuna nets have declined 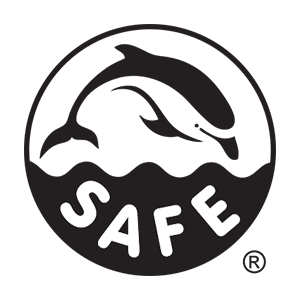 net, and drown thousands of dolphins annually. Mexico is fighting to overturn

the Dolphin Safe tuna label, going to the World Trade Organization and the U.S.

Congress to change U.S. laws so they can falsely label their tuna—stained

by the blood of dolphins - as Dolphin Safe. And, to the surprise of many,

as “sustainable". Earth Island Institute is working to address each

of these issues, as well as bycatch of non-target species in tuna nets

and in stopping fishermen from killing dolphins for shark bait.